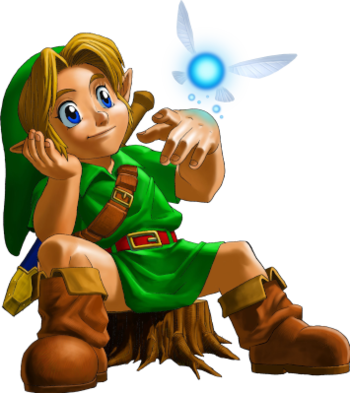 A type of Sidekick. A character is accompanied by a Fairy Creature, usually of the tiny variety and not one of the mean ones (at worst, this character has a mischievous streak). The Fairy often lends a magical helping hand, which doesn't always work out as planned. Hilarity Ensues.

These seem to be extremely common in video games, to the point of turning into a Discredited Trope. One reason for their popularity among developers is that fairies are easy to work with; a speck of light with wings doesn't need much animation.

open/close all folders
Anime & Manga
Comic Books
Comic Strips
Advertisement:
Fan Works
Films — Animation
Films — Live-Action
Literature
Live-Action TV
Podcasts
Spivey: There'sacoupletravellersahead! Weshouldfeedthem.
Harold: Ah, Spivey! How do you fly with that heart of gold?
Spivey: Oh, well... Desna gives me wings!
Misty: Her heart is made out of gold?! How do you know? [Visibly starts to ponder whether she should reach in, pull it out and check]
Harold: Y'know, with the Good Outsiders, I wouldn't be surprised.
Misty: [Grabs Spivey and shakes her] She's not heavy enough to have a heart made of gold?
Koya: Misty, that's not how we usually hug!
— Jade Regent, episode 13
Tabletop Games
Theater
Video Games
Webcomics
Western Animation

Alternative Title(s): Can Of Sprite