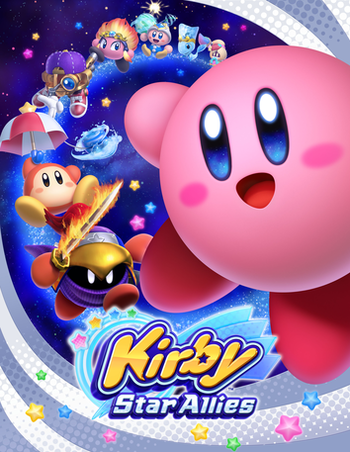 You've got a friend in me...
Advertisement:

Kirby Star Allies is a Platform Game in the Kirby series, and the first game in the series for the Nintendo Switch. It was developed by HAL Laboratory and published by Nintendo.

In deep space, Lord Hyness, the white-hooded leader of a mysterious cult, performs a strange ritual which causes shadowy hearts to rain down on the galaxy. The hearts corrupt the inhabitants of Planet Popstar, including King Dedede, Meta Knight, and Whispy Woods, causing them to act strangely and aggressively. Meanwhile, Kirby is asleep in a field of grass when he's hit by a pink heart, giving him the power to use Friend Hearts. He then notices that something's up at Dedede's castle, and hurries on his way to investigate. Little does he know about the threat from deep space, and that he might need some help along the way...

The core gameplay follows the standards set by Kirby Super Star and Kirby's Return to Dream Land: inhale enemies, copy their abilities, and use their versatile abilities to fight through the levels. The big gimmick of the game is a heavily expanded helper system, similar to that of Super Star. Instead of creating helpers — now known as friends — from abilities, Kirby can now convert certain enemies into friends by throwing a Friend Heart at them. Up to three friends can be active alongside Kirby, and they can either be controlled by the CPU or with other players for Co-Op Multiplayer. Following that, there are the Friend Abilities: extra moves that every Copy Ability and friend have in order to support their friends, commonly by mixing 2 abilities to create powerful combinations, like in Kirby 64: The Crystal Shards and Kirby: Squeak Squad. There are also Friend Platforms, which activate special abilities for the whole group that help them traverse the levels. In addition to the normal friends, the player can unlock additional Dream Friends, playable characters ranging from series mainstays such as King Dedede, Meta Knight, and Bandana Waddle Dee, to long-forgotten characters like Gooey, Adeleine, and Ribbon, and even former villains like Marx, Dark Meta Knight, and Magolor.

Like many "traditional" Kirby games, this game has multiple game modes.

. The second trailer was shown during the September 13th, 2017 edition of Nintendo Direct and can be viewed here

Near the end of Kirby Star Allies, Hyness goes into a lengthy conversation that goes into great detail as to why he wants to revive the Destroyer of Worlds, Void Termina...in the span of around 13 seconds or so.

Near the end of Kirby Star Allies, Hyness goes into a lengthy conversation that goes into great detail as to why he wants to revive the Destroyer of Worlds, Void Termina...in the span of around 13 seconds or so.