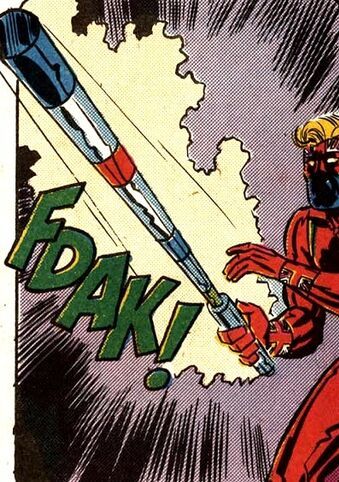 "Is that a telescoping quarterstaff in your costume, Or Are You Just Happy to See Me?"
Advertisement:

This Weapon of Choice is an expandable Staff (stick fighting weapon), able to change its length and/or girth (paging Dr. Freud!); possibly extending into Telephone Polearm proportions. The ability of the staff to become smaller is more often used for portability's sake, though it can still have practical purposes.

There is often not a clear mechanism for this, so some can be magical, controllable by the user's mind, or manipulated by some other technology.

Some may likely be an Expy or reference to Sun Wukong's (a.k.a. Son Goku) Expanding Bo-Staff from Journey to the West, especially in Eastern works. Expect Monkey King Lites to wield one as their weapon of choice.

Subtrope to Retractable Weapon, Morph Weapon, and Simple Staff. Note that the default state is still a staff or polearm, not a baton or other size-changing weapon.