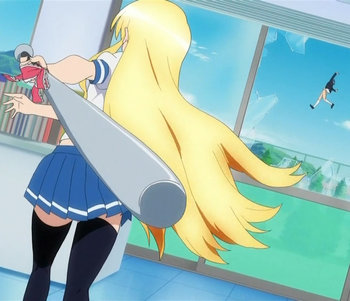 Home Run Hitter describes the act or capability of one character to strike a blow with a melee weapon that is so powerful that it literally knocks the opponent or target into Low Earth Orbit, usually leaving A Twinkle in the Sky. Usually reserved for The Big Guy but occasionally other characters may have this trait, especially deceptively cute little girls. Named of course for the ability of many baseball players to knock a few outta the park!

Compare Megaton Punch, the unarmed version of this type of attack. Not to be confused with Batter Up!, which while uses baseball bats for an effective melee weapon, may not have the same effect of blasting the poor sap outta the park.

After defeating him in a boss battle, Princess Peach sends Bowser flying with her umbrella.

After defeating him in a boss battle, Princess Peach sends Bowser flying with her umbrella.