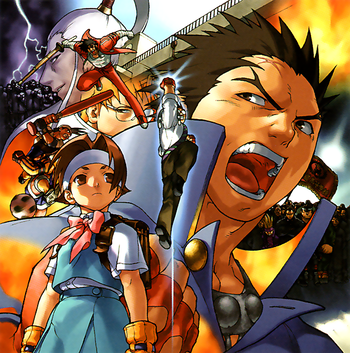 Bound By Honor, United By Fate
"In a time when the minds of youth should be happy and free, a war is about to explode! High school students have become the victims of random attacks and kidnappings. With police proving to be no match for the villains, the students themselves now rise to take matters into their own hands!"
—The opening quotes from the arcade intro of Rival Schools: United by Fate
Advertisement:

Rival Schools, known as Justice Gakuen (lit. "Justice Academy") in Japan, was one of Capcom's attempts to make a 3D Fighting Game. The result was a 2½D fighter which was fought on a 2D plane but spun the camera around to give the illusion of 3D, particularly when someone got catapulted into the air. The original used flat (though animated) backgrounds whereas the sequel went polygonal in that regard. The games are slightly tongue-in-cheek and take place in a world where ghosts exist, high schools can afford their own superdomes, the best academy is run by a retired ninja, students (and teachers!) brawl at the drop of a hat, and most never change out of their school attire.

The first game, Rival Schools: United By Fate, was released in arcades in 1997 and for the Sony PlayStation the following year. Students from all over Aoharu City have been mysteriously disappearing, and teams of Japanese Delinquents unite to identify the mastermind behind it: Hyo Imawano, a Sephiroth clone with a knack for brainwashing people over to his cause—including his uncle Raizo, the juiced-up principal of his school.

Players form teams of two: teammates can tag-in between rounds or deliver an extra punch or health/energy boost, depending on the character. This setup was borrowed from Marvel vs. Capcom 1 and later made its way into a few King of Fighters games.

The PlayStation port added several Mini Games , as well as a character creation mode based on a Dating Sim. Due to the daunting task of translating it into other languages, the latter never made it outside Japan. Fortunately, all of the other home version extras made it in. In Japan, the game was re-released with a revamped character creation mode, along with two new fighters (who also show up in the sequel). In 2012, the PlayStation port of United By Fate was re-released as part of Sony's PSN Classics

It was followed by Project Justice, released in arcades in 2000 and for the Sega Dreamcast the following year. An imposter Batsu (the hot-headed shotoclone advertised in both games) is running around sowing the seeds of tension and distrust among the gangs, which threatens to spark another war between the schools. The culprit, who happens to be an incognito ninja assassin named Kurow, conspires to punish Raizo's family for leaving their clan. Kurow winds up being dethroned by Hyo, who has supposedly turned over a new leaf—but is still haunted by the malevolent ghost of his late father Mugen.

The same students and teachers, plus Kurow's "Darkside Student Congress" and some demon-possessed regulars, are included in the roster. Gameplay-wise, teams are upped to three characters per side, which adds an additional 2-person Team-Up move, along with 3-character combos à la MvC. Once again, the Japanese version had a character creation mode, this time in the form of board games (in the vein of Mario Party) which were all the rage at the time.

The games are pretty obscure and, due to legal issues, a follow-up isn't likely anytime soon. Capcom doesn't seem to have forgotten about it, though: Kyosuke is playable in Capcom vs. SNK 2 (with Batsu and Hinata making a cameo appearance in one of his super moves) and other characters have either cameoed or made playable appearances in Namco × Capcom (Hideo and Kyoko), Tatsunoko vs. Capcom (Batsu, Hinata, Kyosuke, and Raizo), Project X Zone (Batsu), and Street Fighter V (Hinata, Tiffany, Daigo, Edge, Gan, and Akira, the latter of whom would eventually become Promoted to Playable); Word of God stated via Twitter that Rival Schools and Street Fighter share the same universe.