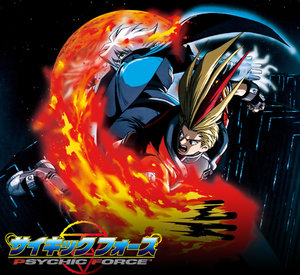 Psychic Force is a fighting game series by Taito, unique in a way that the battle take place in a cubic space enforced with magical energies. Though it opens up for complete 3D battle, it utilizes a 2D battle system, except there's no ground and that your character constantly floats and dashes. Like the later Touhou fighting games, your character is able to throw projectiles on long range, or get close enough for melee attacks. You can also dash to graze through weak projectiles, but stronger attacks cannot be grazed through (unlike Touhou fighting games where even the strongest projectile can be grazed).

The story of Psychic Force borrows heavily from the X-Men series, except that you replace Mutants with Psychics. These Psychics, called Psychiccers are shunned by normal people in general and that they're forced to face hate and discrimination on a daily basis, but an organization of united Psychiccers called NOA, led by a young British Psychiccer man named Keith Evans, rises to make sure that no Psychiccer are forced to face the harshness of the world. Unfortunately, the members of NOA tend to take things to the extreme, causing a small group of unaffiliated Psychiccers, among them Keith's close friend Burn Griffiths, to form a resistance against them known as Anti-NOA so that they can oppose NOA's extreme ways. Of course, there are some fighters who are not affiliated with the two groups, yet they still hunt down the Psychiccers, claiming them to be a dangerous threat to the world.

Psychic Force was then followed by an arcade sequel called Psychic Force 2012, which was ported to the Dreamcast and later got a PlayStation port titled Psychic Force 2. The story takes place two years later after the first Psychic Force, whereas Richard Wong broke away from Keith and formed his own Psychiccer Army, whose ambitions are geared entirely towards world conquest compared to the reformed NOA (now called Neo NOA). Three characters: Sonia, Brad, and Genma were removed from the roster but had received their own successors. The three of them would eventually be brought back in Psychic Force 2 as exclusive characters to that specific title. The sequel itself would also sport out a brand new cast of characters with some returning ones. Both games saw a re-release on PlayStation 2 in 2005 with the Psychic Force Complete compilation that, unfortunately, stayed in Japan. Interestingly, Taito has re-released Psychic Force 2012 for arcades, using the NESICAxLive system found on many cabinets that utilize their Type X boards, as well as upgraded HD graphics.

Psychic Force, while not commercially successful at the time of its initial release, did manage to gain a strong cult fanbase. It had also spawned a 1998 2-episode OVA.

A Character Sheet for this game is in works. Contributions are welcome.

For games with similar gameplay to Psychic Force, compare and contrast to G.rev's Senko no Ronde series (developed by Taito's former employees) and Orange_Juice's Acceleration of SUGURI (a spin-off series of SUGURI).