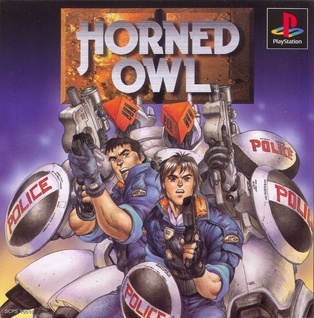 Project: Horned Owl is a Light Gun Game made for the PlayStation. Released in 1995, the game notably features characters and mechas designed by Masamune Shirow, and is available for two players.

In the future, Metro City is guarded by its Police Unit, the Horned Owl division, with the Horned Owl Armored Mechanized Unit officers, Hiro Utsumi and Nash Stolar being their best soldiers. When a terrorist organization known only as Metalica launches an invasion with their seemingly endless horde of robot mooks, players will assume control of Hiro or Nash to take on enemy mechas in levels spanning across the city, airport, industrial zone and climaxing in a space station.