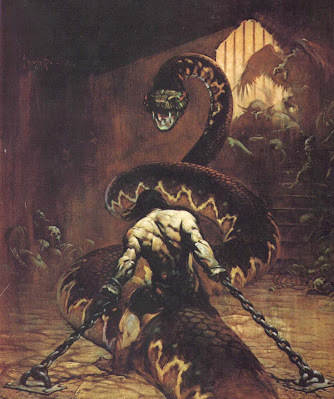 " is a Conan the Barbarian story written by Robert E. Howard. First published in January, 1933.

King Conan is captured in a deadly trap by King Strabonus of Koth, his former ally King Amalrus of Ophir, and their evil sorcerous advisor (and the true power behind the throne) Tsotha-Lanti. They want him to abdicate his throne in exchange for a pile of gold so that they can annex Aquilonia as part of their growing empire. Conan, being Conan, isn't having this one bit, and tells them all to go to hell. Tsotha pens him in the dungeons of the Scarlet Citadel, intending to feed him to his gigantic snake known as Satha.

Meanwhile, Conan's kingdom is in a bad way, and the people suffer under the rule of Arpello, the puppet king installed by Strabonus and Tsotha. Conan escapes his bonds when a slave's attempt to avenge his brother upon him gets him killed by Satha. After braving the Citadel's many horrors, Conan finds and frees Pelias, a sorcerer and rival of Tsotha, who summons a giant flying beast to take him to Shamar, the capital of Aquilonia, and take it back from Arpello. Having taken back the capital, Conan rides with his army to take down Tsotha's imperial forces, and in a furious battle, Strabonus, Amalrus and Tsotha are all slain.

This story has been adapted in comic form by both Marvel Comics and Darkhorse Comics.

Tropes featured in this story