Literature / The God in the Bowl 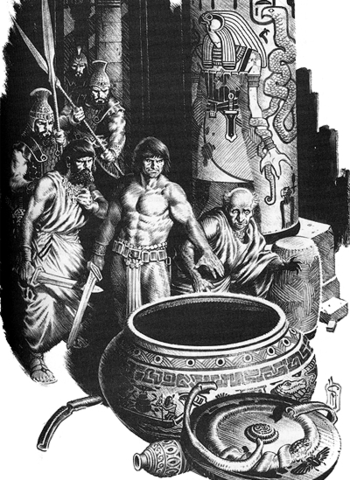 "The God in the Bowl" is a Conan the Barbarian story written by Robert E. Howard.

A nightwatchman at Kallian Publico's temple comes upon the owner's corpse while making his rounds, only to run into Conan in the process of attempting a heist. Thinking Conan the murderer, the watchman sounds the alarm to summon the city guards, and by luck the chief inquisitor happened to be accompanying the guards on their round. An investigation is initiated, and despite the chief guard's insistance that Conan is the guilty party, the inquisitor finds doubt as to such accusations.

As the investigation goes on, more participants are brought in, secrets are revealed and eventually, Conan stands alone against an otherworldly foe...