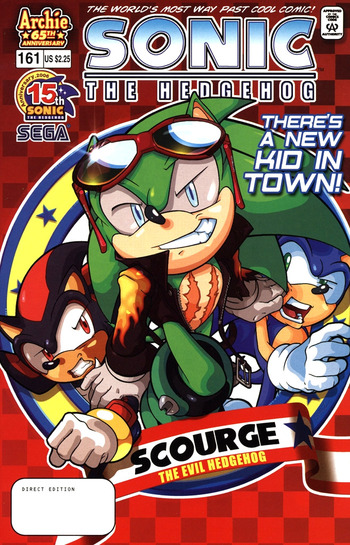 All it took was one birthday party, and this li'l piece of cheese won over everybody who isn't part of the Freedom Fighters.
"I was a popular character and villain; seeing me again should drive up the viewers."
— Mechakara, Atop the Fourth Wall
Advertisement:

Not every hero has an Arch-Enemy... initially. Sometimes, though, a villain will be introduced who ends up being a Breakout Character in his/her own right, and thus a Villain of the Week becomes the villain of the series.

This can be caused by many things, from Writer Revolt, to unbridled fan response to the character, to the writers being blown away by the performance of the actor who shows up to play the role.

Note that this is the accidental creation of an archenemy, not Executive Meddling of "let's make an archenemy for X-character": a Breakout Villain is one who was meant to be a one-shot throw-away that, through fan/author/executive/all-of-the-above response became not only a staple villain, but the villain of the series.

In some cases, the character may never again appear in the original authors' stories, but because of the popularity of the character, subsequent authors or even the fans in general may make their parts bigger and more integral to the mythos in question, via subsequent stories, adaptations, or simply fanon.

Sometimes, these characters become antiheroes in their own right, with all the attendant risks. Other times, as indicated by the frequency of "Heel–Face Turn" in the examples below, they become outright heroes in their own right. Most often, though, they retain their wonderful Big Bad status. Can cross over with Hijacked by Ganon if they are turned into a Greater-Scope Villain overseeing a lot of plots seemingly masterminded by different villains.

Compare Ensemble Dark Horse, Spotlight-Stealing Squad. Contrast with Token Motivational Nemesis, a major nemesis who is killed off as soon as the first story arc ends.