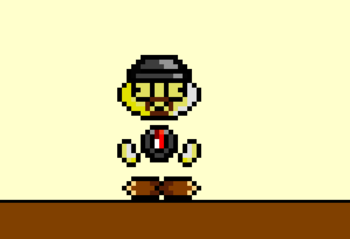 Hi, I'm Skapokon and this is Retropokon, your gaming time machine

Retropokon is an sprited review show created by Carla Romero that stars Original Characters of the forgotten Joy Mech Fight. Instead of having sub-categories, there are different sections to cover many types of media. He also created Lawl Nova and shares universe with Aitor Molina Vs. and the rest of shows in the Revengeverse.

“Sunglasses? 30 hours stuck in the moturret level only for sunglasses???”
—Skapokon

I'm Skapokon and we return to the real world!