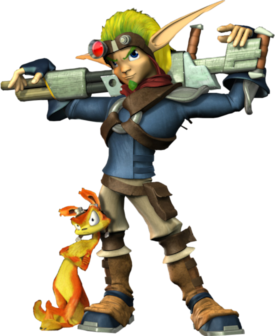 This world is better left to Jak.
"For every age there is a time of trial. The rocks faced such a fire before they were the strength beneath our feet. The plants braved vast winds before their roots could give us life. As a sage of considerable years, I have known only one such great ordeal. Yet the hero it created was a champion of all time."
— Samos the Green Sage
Advertisement:

A series of Platform Games created by Naughty Dog for the PlayStation 2 and PSP, Jak and Daxter is centered on the escapades of the Heroic Mime turned rogue turned good guy Jak, who has the ability to channel the energy substance known as Eco, and his wise-cracking, human-turned-ottsel sidekick, Daxter, who usually just sits on Jak's shoulder while he does all the hard work. And this is just two of the many people you'll get to know throughout the series. So far, the series consists of:

Tropes related to those specific games can be found on their pages.

Taking it to the next level, SCEA released PlayStation Move Heroes, a three-way crossover between Jak and Daxter, Ratchet & Clank, and Sly Cooper. The titular duo also appears as playable characters in PlayStation All-Stars Battle Royale.

Gameplay across all Jak games consists of exploration mixed with mild combat and platforming in a variety of different scenarios. The first game is a Wide-Open Sandbox collectathon in the vein of Super Mario 64, while every game past Jak II are closer in structure to something like Grand Theft Auto III. Of course, that's not all the series borrowed from Grand Theft Auto- the Jak games are infamous for taking a Darker and Edgier route as the series went on, with numerous elements being revamped to be more appealing to a teenage audience. Jak goes from a Silent Protagonist to a bitter and aggressive Anti-Hero, the combat gets augmented with firearms, and the world becomes a hellish Dystopia filled with unsavory characters.

On a side note, the Ratchet & Clank series seems to have a very friendly rivalry with this one. (An Insomniac game having a rivalry with a Naughty Dog game? Sounds familiar...) Games in both series will liberally borrow some concepts from the other, and will commonly feature cameos and even sometimes playable appearances of the other heroes.

In February 2022, it was confirmed that a film adaptation

was in the works to be directed by Ruben Fleischer, director of the movie version of fellow Naughty Dog series Uncharted.

After collecting a certain Power Cell in the Lost Precursor City, Jak triggers a switch that causes the Dark Eco below him to start rising. So he has to book it up and out of the room to avoid the instadeath Dark Eco.

Example of:
Rise to the Challenge

After collecting a certain Power Cell in the Lost Precursor City, Jak triggers a switch that causes the Dark Eco below him to start rising. So he has to book it up and out of the room to avoid the instadeath Dark Eco.