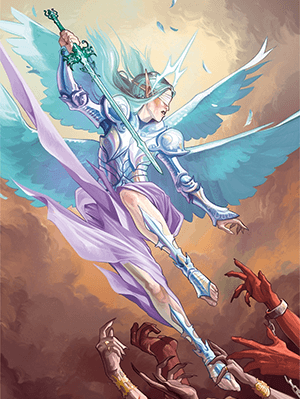 The angel Zariel, prior to her descent into devilhood.
Advertisement:

The heavens are blue. Therefore, heavenly beings, whether gods or angels or saints, use blue — usually sky blue — to show their relationship, as do beings associated with them. Much more likely to be Good than Evil (in the former case, see Blue Is Heroic). May be used only as an accent in Gold and White Are Divine, or use white and gold as an accent. Innocent Blue Eyes may invoke this.

Contrast Big Red Devil, Red and Black and Evil All Over, and Red Eyes, Take Warning.