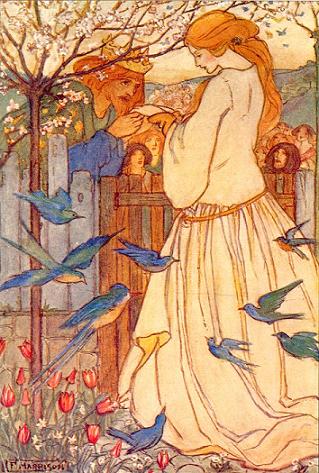 Perhaps it's because they're a shade of Heavenly Blue, but bluebirds are symbols of happiness — and this indeed, covers several entirely different species of songbirds, as long as they have blue feathers.

A common plot is to go on The Quest for one only to return home empty-handed and find it was already there. Outlining the Aesop that home is where you will find happiness is optional. While they have learned to recognize it from the quest, it's usually not It's the Journey That Counts, because it is usually treated as something they should have recognized even before.

Besides this MacGuffin status, they can also be local color, but because of the symbolism, they are seldom the Loyal Animal Companion.

As true bluebirds (actually members of the thrush family) are only native to North America, any instance of them showing up in Europe is Misplaced Wildlife. However, some mentions of "blue birds" in popular fiction and poetry, such as the French play L'Oiseau Bleu, predate the discovery of the American bluebird; they are thought to be references to a different bird known as the blue rock-thrush.