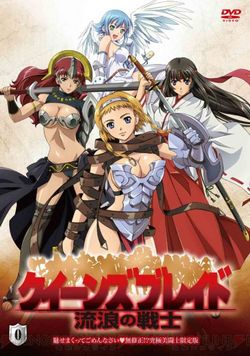 "To the strongest go the spoils. That's the law of this land."
— Risty
Advertisement:

Originally a series of one-on-one combat gamebooks based on Lost Worlds.

Lost Worlds let two players duel by exchanging books that represented different characters, with illustrations representing each action you could take. In 2005, Hobby Japan released a remake of the series, but instead of generic fantasy monsters, the characters of Queen's Blade were all women designed with a more ecchi slant. And thus the Fanservice began.

The story is as follows: Every four years, there is a tournament to decide who will be the next queen of the land. The rules are extremely simple: as long as the contestant is over twelve years old, the last one standing wins.

The whole franchise is split into many continuities:

For similar Panty Fighter shows, see Variable Geo, Koihime†Musou, and Ikkitousen. See also Bikini Warriors, a show with a similar fantasy setting and Stripperific female warriors. Also compare to the Senran Kagura series, but with ninjas instead of fantasy stuff.

Not to be confused with the MMORPG Scarlet Blade, which is called Queen's Blade Online in its home country of South Korea.

At January 2017, Hobby Japan announced a complete reboot of the franchise, named Queen's Blade Unlimited. The reboot retells the whole original continuity with updated character designs. An OVA has been announced for release in July 2018. At November 2018, a smartphone browser game called Queen's Blade White Triangle featuring the Unlimited designs, was announced.

NOTE: Only general tropes for the series as a whole should go here. For character-specific ones, check out the characters sheet.

Tropes in Queen's Blade include: