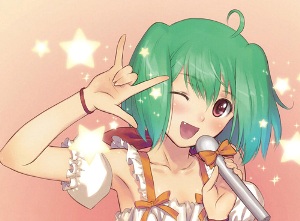 She's young, cute and can sing too. Just like the girl they chose to voice her.
Advertisement:

Much of Asian pop music centers around "idols", entertainers trained in a multitude of performance skills with singing as their primary focus. Idol singers are recruited through multi-level audition processes, manufactured, and managed by media companies as "products" that are influential in advertising, campaigns, and dramas with their image and music. Idols are intentionally marketed to seem normal and approachable in order to be relatable to their fans and be the underdog that everyone wants to support. As such, a core part of the "idol aesthetic", so to speak, is that they are trained to sound like a "normal person" when singing, rather than a trained, professional singer. Their objective is to "sell dreams", which basically means to entertain and be the healing balm that relieves people from the anxiety and stress from their daily lives. As such, most of their public appearances picture show them as charming or having tons of fun.

The concept and marketing model for idols originated from Japanese Pop Music but has also appeared in Korean Pop Music since the 1990s. There has been a shift towards "mega-groups" due to them being more financially successful than solo singers. Most are tightly controlled by their producers and expected to maintain a public image of purity and innocence for brand and marketing purposes through Contractual Purity. While this level of control has loosened somewhat with the growing impact of social media, which allows idols to interact with fans more casually, as well as a Japanese court decision that effectively rendered the "no dating" clauses of idol contracts unenforceable (it's still very in-force in Korea, however), the industry has been slow to overturn its most problematic and exploitative elements. Idol companies are known to ruthlessly discard their talents after a few years of cranking out formulaic hits for any reason they want, or bind them in long contracts. Most idols change careers after the age of 25 due to the industry valuing freshness and youth. Some idols move onto becoming serious actors and singers, while the less successful ones end up becoming a Former Child Star.

The relationship between idols and their fans is also a notable feature, as their longevity is co-dependent on each other. Idols are specifically marketed to create a strong emotional connection with their consumer fan base for the sake of buying their merchandise, and in doing so, fans are viewed as loyal supporters who carry them throughout their career. Some fans may get possessive and believe idols should be Married to the Job, which may lead to Yoko Ohno if a dating scandal happens.

As the Idol Singer trope is more prevalent in Japan and South Korea, there is Values Dissonance involved in the fan culture and how the performers are marketed. Westerners are more likely to find the way they are marketed as exploitative and are often shocked by how strict their Contractual Purity clause is. However, a comparable equivalent in the West is the Disney Channel due to holding a similar image that idol singers are expected to portray. During The New '10s, the Idol Singer trope collided with the anime industry to form the Idol Genre, always on the lookout for new trends to sell Moe merchandise and Dating Sim games.

If an idol is a villain in a Superhero or Magic Idol Singer show, they might be an Evil Diva. The Western equivalent of this trope is a Teen Idol, which may overlap. Do not confuse with the singer Billy Idol. The other wiki has more information about the history of idol singers.

The Squid Sisters are an Inkling pop idol duo consisting of Callie and Marie.

The Squid Sisters are an Inkling pop idol duo consisting of Callie and Marie.