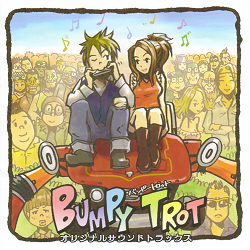 A relaxing non-linear adventure! Get ready for... STEAMBOT CHRONICLES!!
Advertisement:

Steambot Chronicles is a 2005 (2006 in Europe North America and Australia) Action RPG made by Irem for the PlayStation 2, known as Bumpy Trot in Japan. The game is set in a Steampunk Alternate Universe where most daily tasks are handled by steam powered mechs, affectionately known as Trotmobiles. The main character, Vanilla, wakes up on the shore of Seagull Beach with amnesia, awakened by a girl who's part of a band called the Garland Globetrotters. Finding an abandoned and beat up trotmobile nearby, he agrees to help her reunite with her friends in the nearby town, while also trying to rediscover his lost past. Supposedly.

Said to be like Grand Theft Auto if you removed every shred of psychopathy from the mix, Steambot Chronicles offers a cheery Cel Shaded world with a massive amount of SideQuests, MiniGames, fashion, music, and myriad other ways to completely waste your time. The game has a massive array of choices, from what Vanilla says, to what Vanilla wears, to what Vanilla does, ninety percent of which does not actually matter as far as plot is concerned, but are quite effective as a means to... completely waste your time.

The game didn't sell particularly well, at least partially thanks to its incredibly laid back style, as well as load times and occasionally wonky controls.

It was followed by two spinoffs. The first, Blokus Club with Bumpy Trot for the Playstation 2, was a Japan-only video game adaptation of the popular tabletop game Blokus featuring characters from Steambot Chronicles. It was later ported to Playstation Portable as Blokus Club Portable, which was released internationally as Blokus Portable: Steambot Championship. The second, Steambot Chronicles: Battle Tournament for the PSP, was an actionized spinoff released in 2009 and taking place sometime after the first game. It did away with most of the elements Steambot Chronicles was known for, focusing purely on the Trotmobile battles and the side quests.

It attracted a small cult following, and was going to get a proper sequel due in part to this, BumpyTrot 2, was announced in 2006. It was in Development Hell for years before finally getting cancelled along with a slew of other games, shortly after the 2011 Tohoku earthquake and tsunami.

The series has no relation to that other game about steambots.