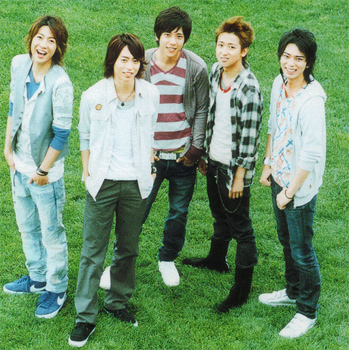 Arashi, (嵐, literally 'Storm') is a Japanese idol group who were founded in 1999 as one of the many acts produced by Johnny's and Associates. They are a hugely successful group comprised of Satoshi Ohno, Sho Sakurai, Masaki Aiba, Kazunari Ninomiya, and Jun Matsumoto.

On top of a successful music career Arashi have also hosted their own radio and TV shows, and acted in films, dramas, and plays. Most popular of their TV enterprises is VS Arashi, a hilarious Prime Time Game Show which also airs in Australia on SBS2.

One of the strengths of the group is their close relationships with each other and a very balanced popularity between the members. Each member in the group has a strong personality and holds a specific role within their group as well as in the entertainment industry.

On January 27th 2019, Arashi has announced that the group will pause all group activities from December 31st, 2020.