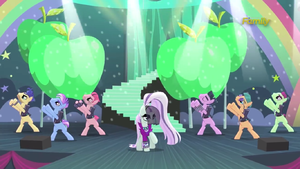 "Razzle dazzle/Glitz and glam/Turn it all up, it's a spectacle..."
"This song may be familiar, but yet, it's totally different. Kind of like me, Rara."
— Coloratura
Special Guest Star: Lena Hall as Countess Coloratura
Written by Amy Keating Rogersnote Her final episode as a writer for the show.
Advertisement:

Countess Coloratura is upset about what's happened, but Applejack convinces her to perform that night as Rara instead of her glitzy pop persona. Countess Coloratura ditches glitz and glam to become Rara again, but stage fright and worry about being herself almost overwhelms her. Applejack tells Rara that being herself will mean everything will turn out okay, and Rara takes the stage. Rara proudly sings a soft piano number about how she's thrown off the veil and become herself again, which is met with roaring applause. Afterwards, Rara thanks Applejack for convincing her to be herself, inviting the Cutie Mark Crusaders onstage to sing the song that Rara and Applejack made up for summer camp.

Example of:
No Celebrities Were Harmed