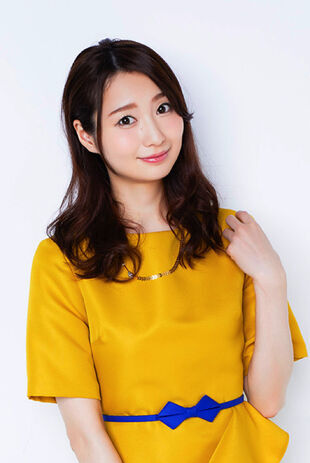 According to The Other Wiki:

Haruka Tomatsu (born February 4, 1990 in Ichinomiya, Japan) debuted as a seiyū in 2007, starring in Polyphonica as Corticarte Apa Lagranges. Since then, she has had other major roles such as Lala Satalin Deviluke in To Love-Ru, Shiho Sannomiya in Psychic Squad, M.M in Kemeko Deluxe!, and Nagi in Kannagi: Crazy Shrine Maidens.

She used to take the bullet train from Nagoya and Tokyo just to do her seiyu job. These days, she attends a Tokyo college and doesn't need to go back and forth any more.

With the popularity of Asuna and Anaru, she has started to be pigeonholed as Tsundere characters. Compare Rie Kugimiya for a seiyuu of Tsundere in the early to mid 2000s.

Fan Nicknames include "Omatsu" and "Harukasu", the latter partly taken from the name of an earlier photo album of hers, and partly for being 165 cm tall, and the name of Japan's tallest building being Abeno Harukasu

Born in 1990 and debuting at age 17, she may be one of the first seiyuu born in The '90s, and after the fall of the Berlin Wall. Otaku born in the '70s or '80s can start feeling like senior citizens now.

In January 2019, she announced that she had gotten married to a man not involved with the anime or voice acting industry. In February 2021, she just recently announced on her Ameblo Blog that she had just given birth to a baby daughter the other day.

Tropes associated with Haruka Tomatsu include: