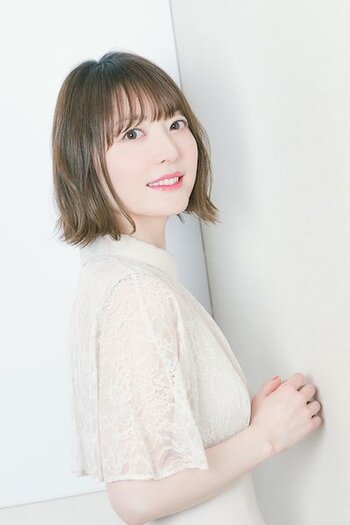 Kana Hanazawa, born on February 25, 1989 in Tokyo, is a popular seiyuu and singer. She debuted as a voice actress in 2003 but it wasn't until 2006 that she started doing voice work with any regularity and has gone on to have several major roles since then. Many of these make her a Relationship Voice Actor with Haruka Tomatsu. The characters she tends to play are often very timid, soft spoken girls, The Stoic and/or snarky as well as being a source of perverted seiyuu jokes, namely that topless 4koma moment as well as 1 time 100 yen memes.

Her breakout role was probably Nadeko Sengoku and the Moe Image Song "Renai Circulation" from Bakemonogatari. Her popularity steadily rose in 2010 and is on her way to become one of the more prominent seiyuu. She was cast in 5 shows in the fall season of 2010, tied to three other seiyuu in second place in the numbers of roles.

In addition, Kana enjoys such respect and support from the public that her participation in the Harem Genre or Romance anime is guaranteed to cause Ship-to-Ship Combat and Die for Our Ship because of her frequent Typecasting as a very cute and likable Romantic Runner-Up, which often intentionally or not, become a powerful Ensemble Dark Horse. As a result, in the anime community, she is jokingly called "accursed" and is considered the mentor of other actresses with a similarly sad reputation like Inori Minase.

In subsequent years, she also tries to escape from the standard role, portraying the merry, loving to play a trick on the main character Ojou in The Irregular at Magic High School and Gabriel DropOut, tsundere in Oreimo or even Sugar-and-Ice Personality in Angel Beats! and Sagrada Reset. Such a variety of memorable characters, allows her already in 2017 to be the obvious winner in the survey of the top 20 most popular seiyu in the year.

In February 2017, she was confirmed (courtesy of Japanese paparazzi) to be in a relationship with fellow voice actor Kensho Ono and had been living with him for some time. On July 8, 2020, it was announced through her Twitter

that she officially tied the knot with him.

She's known infamously by some fans (especially within the Sinosphere) as "Northern Hyogo", which originates from a scene from a morning TV interview that showed her donning a memetic smile while the cycling weather forcast on the top of the screen JUST HAPPENED to be displaying the weather for Northern Hyogo prefecture, see for yourself

Tropes associated with her career: