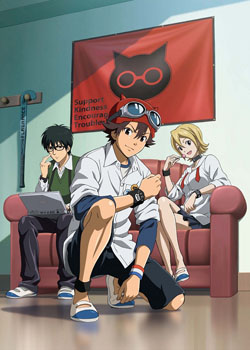 Sket Dance is a very light and upbeat Slice of Life comedy manga that was published by Weekly Shonen Jump from 2007 through 2013, written by Kenta Shinohara.

The manga follows the main character Bossun and campus support group, the Sket Dan, as they help out everybody in need and accept any sorts of missions. From chasing and capturing a monkey, to performing at school concerts, collect toys, try to win all-you-can-eat contests and solve crimes. There are also AU chapters where they go on adventures as ninjas and fly through space. The plot is basically non-existent except for a few more serious and dark story arcs that merely serve as backstory for the Sket trio. The entire manga is full of Shout Outs to any popular manga you can imagine with hilarious lampshades over each and every of them, a boke-tsukkomi routine and an occasional sledgehammer to the fourth wall.

Over all, it's random, fourth wall-breaking, random, funny, random and absolutely adorable. Got an anime adaptation in April 2011.

Do not confuse with Skip Beat!