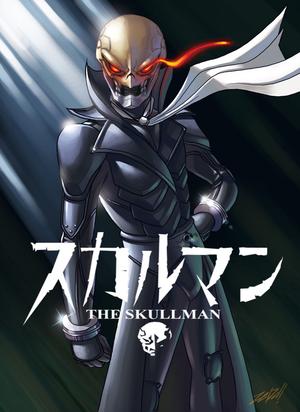 Originally seeing the light of day in a 1970 one-shot manga, Skull Man was created by Shotaro Ishinomori as his own version of the concept that would become Kamen Rider. It was rebooted in 1998, shortly after Ishinomori's death, by Kazuhiko Shimamoto using Ishinomori's notes. A TV Anime debuted in 2007.

The Skull Man was originally Tatsuo Kagura, the adopted son of a Yakuza family. He was actually the son of a mad scientist and his wife, secretly mutants, who performed experiments on him and his sister, Maya. Fearing the consequences of the experiments, Tatsuo's grandfather killed his parents and tried to kill Tatsuo. However, Tatsuo was saved by a shape-shifting mutant called Garo, who later raised him. Now, Tatsuo as Skull Man commits serial murders in his attempt to find the killer of his parents. And when he does... (The anime's storyline is significantly different.)

Not be confused with a different Skull Man. or Skull the Kamen Rider, for that matter.