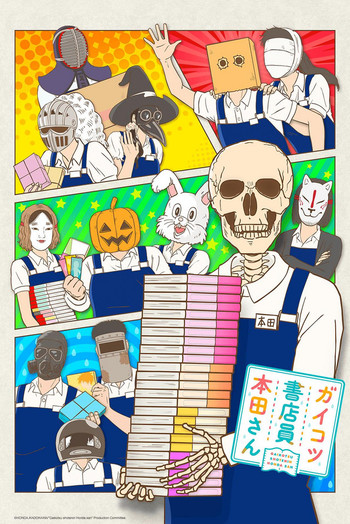 Skull-face Bookseller Honda-san (ガイコツ書店員本田さん Gaikotsu Shoten'in Honda-sannote lit. "Skeleton Bookstore Employee Honda") is an autobiographical Japanese comedy/essay manga the eponymous Honda. It depicts Honda's day-to-day life as an awkward bookstore employee... except she draws herself as a skeleton and protects all of her former coworkers' identities by drawing them with weird masks and other headgear.

It's been featured on Pixiv since August 2015, and received an anime adaptation that first premiered on October 8, 2018.

You can find the anime on Crunchyroll here

. Discotek holds the rights to be retailed in English.

This anime provides examples of