Anime / This Ugly Yet Beautiful World 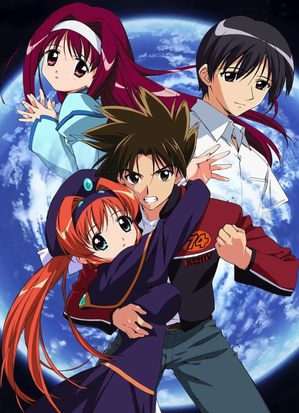 Created by Studio Gainax and animated by both Gainax and Studio Shaft, This Ugly Yet Beautiful World celebrated Gainax's 20th anniversary. It ran from April 1 to June 17, 2004.

While it starts out as a simple Magical Girlfriend series, it ends up being more like a Lighter and Softer version of Neon Genesis Evangelion.

Orphans Takeru Takemoto and Ryo Ninomiya are ordinary high school students who witness a strange light descend from the skies and then split into two. Upon investigating it, they find a cute girl who doesn't seem to know who she is. Her appearance, along with that of her "little sister" Akari, shake up the simple lives of the town with the joy of seeing the world for the first time. The story follows Hikari and Akari in their learning about humanity at its brightest and darkest, as well as their own mysterious origins. It also contains more than its share of Fanservice.