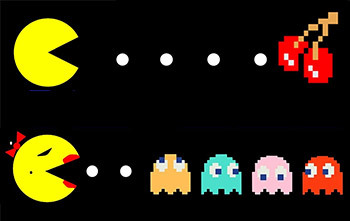 One common method used in creating a Spin-Off is taking the main character of the show, creating an equivalent that's mostly the same except for being the opposite sex, and then packing the new character off to her own series. This allows the station or network to fill up extra space on the schedule with a known quantity, while (in theory) stretching its demographic to female viewers. This method is very popular among action-adventure series, which mostly appeal to young males.

While heroes are usually the ones to get this kind of treatment, it's been happening more and more to villains too.

There's also the third kind of Spin-Off, with a long-lost sister showing up or a new girlfriend brought in, only to repeat whatever circumstances gave the main character his powers/duties/what-have-you.

A male character who goes through the Gender Bender will find himself turned into his own Distaff Counterpart. The implications for the character, writers, and audience are left as an exercise for the reader.

Since "distaff" means "female", the inverse of this (a male counterpart to an existing female character or Always Female trope) is technically and traditionally a Spear Counterpart (which was named for the spearhead-shaped end of the symbol of Mars that represents males. You may also be thinking the "spear" meant something else... and you'd be right, because that's what the Mars symbol is based on, too).

Textile Work Is Feminine; that's why it's used to symbolize femininity.

Compare Gender Flip, which reverses roles based on gender, rather than cloning them. If a normally gender-specific trope is played on its opposite gender anyway, that's a Gender-Inverted Trope (otherwise known as a rare male/female example). If they're fan-created, it's Rule 63. If this appeals to a fan fetish, it's a form of Fanservice. When you take this trope to its literal conclusion, you get an Opposite-Sex Clone. See also Contrasting Sequel Main Character. Contrast with I Just Want to Be Badass.

The laws of probability and large numbers will in all likelihood turn this into Truth in Television eventually for most of us.

Tropes that have Male - Female Counterparts

Indexes that have Male - Female counterparts

open/close all folders
Anime and Manga
Comic Books
Comic Strips
Fan Works
Films — Animation
Films — Live-Action
Literature
Suppose you're a kid attending wizard school, with classes in Potions and Broom Flying, in a medieval castle surrounded by dark forests. It's hard for you, since you weren't raised by a magical family, but you make two best friends pretty quickly, and then spend the rest of the series getting into adventures with them—usually of the out-of-bounds kind. Your chief rival, meanwhile, is the stuck-up scion of an old magical family... who, to make things worse, is blatantly the favourite of one of your most-hated professors, the sour-faced potions teacher. At least the kindly old head teacher is on your side...
Mythology and Religion
Music
Print media