Two Girls and a Guy 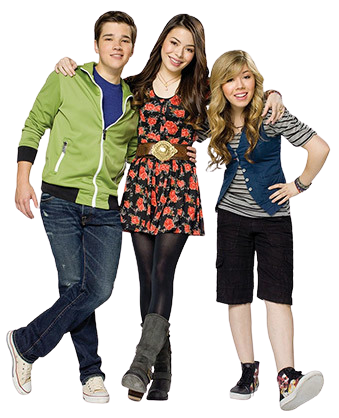 Three friends that have been True Companions for most of their lives: a girl, her best friend and her best male friend.

The main girl is The Hero, and is usually an Audience Surrogate. Whether or not she's an Action Girl, or a Cute Clumsy Girl, or the Girl Next Door, the audience finds it easy to relate to her. The other girl will usually be the opposite from her in some way in personality or looks. She isn't The Rival, usually. That's usually saved for another girl who's the main villain, maybe the Alpha Bitch or a Dark Action Girl. Tomboy and Girly Girl or Red Oni, Blue Oni combinations are common with this pairing.

The guy in the equation is usually friends with both of the two girls or knows them. He is often a childhood friend of both of them and has different interactions with the girls based on their personalities. He is usually just a friend or has no romantic feelings of any sort towards them. Often times, he's One of the Girls. He's usually The One Guy.

This type of trio is very present in female-targeted works, particularly with young girls. Very much susceptible to the Love Triangle, if romance is in the equation, whether the guy is in love with The Hero or The Lancer is usually up to the particular show. There may be a Cat Fight that might ensue, but usually there's more tension amongst the trio than anything. Expect a lot of Ship-to-Ship Combat and Die for Our Ship in regards to which girl ends up with the guy, or, in the case of strong Les Yay, if the guy ends up with neither of them. Rarely do they become a threesome.

In some variations, the male character may even be The Leader and The Big Guy, if both the main and the other girls also serve the Smart Chicks role.

Compare ¡Three Amigos!, where the protagonist is usually male; see also Two Guys and a Girl.

Not to be confused with the 1997 film of the same name (which, of course, is an example).