Literature / My Sister The Vampire 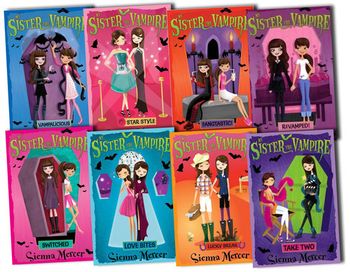 Eight of the books in the series.
Advertisement:

My Sister the Vampire is a series of American novels aimed at young girls.

The series follows a pair of long-lost twin sisters named Olivia Abbott and Ivy Vega (they were separated as babies and adopted into different families when they were a year old). After Olivia and her adoptive parents move to the town of Franklin Grove due to a job transfer, Olivia eventually discovers that, in addition to her and Ivy being long-lost twin sisters, Ivy's also a hiding a very grave secret.

My Sister the Vampire contains examples of: