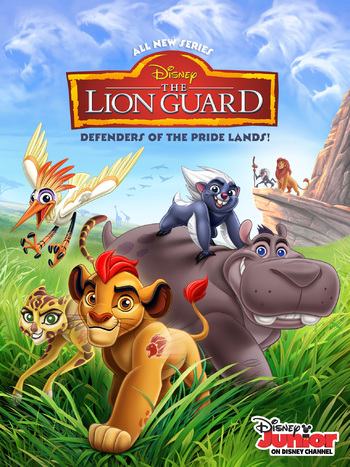 "Till the Pride Lands end, Lion Guard defend!"
A Disney Junior animated series based on The Lion King franchise that came out January 15, 2016. Prior to release of the series itself, the Pilot Movie The Lion Guard: Return of the Roar aired on November 22, 2015. The series is set within the timeframe of The Lion King II: Simba's Pride.
Advertisement:

The series stars Simba's son, Kion. The Lion Guard follows Kion as he assembles the members of the "Lion Guard". Throughout the movie and the series, the diverse team of young animals learns how to utilize each of their unique abilities to solve problems and accomplish tasks to maintain balance within the Circle of Life, while also introducing young viewers to the vast array of animals that populate the prodigious African landscape. As all this is going on, Kion deals with the responsibilities and burdens that comes with being leader of the Lion Guard, seeking to take his own rightful place in the circle of life - that is, if he can confront the legacy of the Guard left behind by his predecessor, his late uncle Scar.

It was renewed for a third season in March 2017, which was announced as the final season in April 2019. Production ended on July 19 of said year. The final season takes place during Simba's Pride's second act, which explains where Kion and the Guard were during the film's events. The series ended on November 3, 2019.

This movie and series provides examples of:

Jasiri gives Janja a chance to stop working for Scar and join her. Which side will he choose...?

Jasiri gives Janja a chance to stop working for Scar and join her. Which side will he choose...?