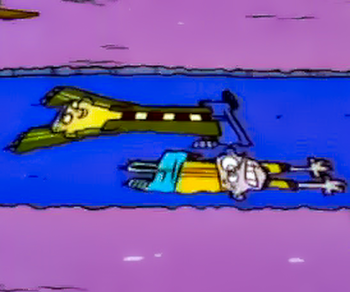 Ed and Eddy, literally Flat Characters!
"And if you have any idea what a guy looks like after two tons of metal land on him from eighty feet up... you keep your ideas to yourself."
— Porky, The Thing on the Fourble Board
Advertisement:

Cartoon characters can survive a lot of things. And if a character ever suffers from the dreaded Anvil on Head, one of several things can happen. They can become an Accordion Man, or this trope can occur.

Often, characters will be Squashed Flat by some heavy object landing on their head, or by going really fast into an immovable object such as a wall, or a big and heavy character will squash a smaller character and leave them stuck to their bodies like Butt Stickers. (Literally so, in the case Ass Kicks You where the victim is sat on). The resulting injury has the character flattened down to a paper-thin state. While in this state, the character becomes incredibly light and can be lifted, manipulated, rolled up, or folded by another character.

Unlike in Real Life, these injuries are hardly ever fatal, and like most Amusing Injuries, are healed in just five seconds. Often, all it takes is another character flapping the flattened character around like a beach towel or inflating the character like a balloon to get him or her to return to his/her normal state.

Although this trope is mostly an Animation Trope, it sometimes creeps into Live-Action TV shows and films with a more 'cartoonish' feel. If portrayed realistically, it can lead to Cruel and Unusual Death.

Can be the result of a Crush Parade when this trope is exaggerated.

May sometimes be followed up by another Amusing Injury gag, like Accordion Man (if the crushed character quickly springs up), Be the Ball (usually if the character is crushed into a coin-like shape, with a short inflation sequence inbetween the two) and so on.

Sub-Trope of Forcibly Formed Physique. Overlaps with Paper People, which is either a natural state of the characters or the state that results from being Squashed Flat, and Construction Vehicle Rampage if done by a steamroller, which is a common way for invoking this. Not to Be Confused with Flat Character. Compare with Hammered into the Ground, Butt Sticker, and Sleep Squashing.

However, as this can be a Death Trope, beware of spoilers.

Gabra gets Rolled Over

Gabra gets squashed by Yukionna with her giant snowball attack.

Gabra gets Rolled Over

Gabra gets squashed by Yukionna with her giant snowball attack.