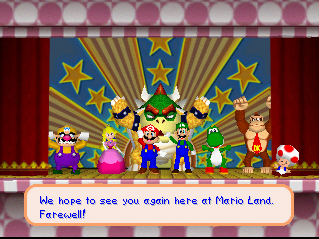 One of the best ways you can end either a show or a series is to have all the characters all come together in such a way that summarizes the entire show. The order in which they appear is generally minor or tertiary characters first, then characters that were more important take their bows, and the progression repeats until the major characters take their bow.

This procedure originated as common theatre courtesy from the cast, so that the audience may show their appreciation for the cast, and the cast to thank the audience for taking their time to watch them. This practice later migrated to other forms of media, with live-action TV series and films (being evolutions of the theatre medium) being the most common. This trope is very common among Pantomime productions, even more so if one of the members of the cast is portrayed by a celebrity of some sort.

Animated media and video games can also do it, but this is less common.

See also Credits Medley, another way of summing up a show with elements throughout. In fact, they're commonly played during Curtain Calls. "Everyone Comes Back" Fantasy Party Ending is a subtrope. See also Enemy Roll Call.