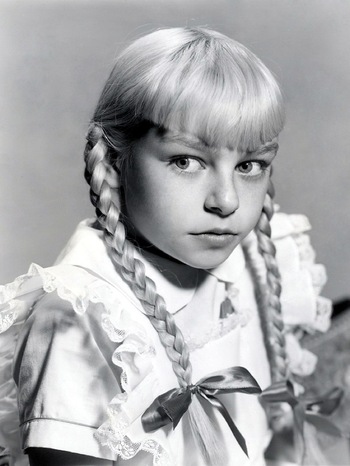 She may be cute, but she's the worst monster you'll ever come across.
Advertisement:

William March's 1954 thriller novel The Bad Seed, previously adapted as a stage play, saw its first screen adaptation in 1956. Directed by Mervyn LeRoy, the film version very much followed how the play had taken the story, even to the point taking a good chunk of the stage cast along for the ride.

Christine Penmark (Nancy Kelly), a housewife, moves into a new town with her husband Kenneth (William Hopper) and daughter Rhoda (Patty McCormack). Christine has always thought her daughter was very peculiar; while always polite, courteous, and charming in public, there was a cold, apathetic, and calculating quality in Rhoda's personality that she found very disturbing in a child. As Christine notices the strange, horrible things that happen in the proximity of her daughter, she comes to realize that Rhoda is the very definition of an Enfante Terrible.

Two unofficial sequels, Mommy (1995) and Mommy 2: Mother's Day (1997), star Patty McCormack as the bad seed all grown up with a daughter of her own. She also made a cameo as a child psychologist in Rob Lowe's Lifetime Movie of the Week 2018 remake.