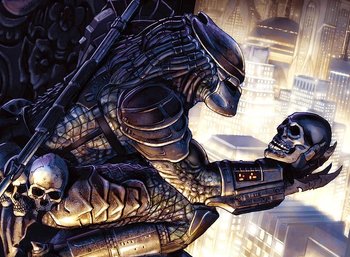 Alas, Poor Yorick. He was good sport.
"I'm not that good with names and faces, but I never forget a trophy."
— Lockdown, Transformers: Animated
Advertisement:

We all have souvenirs — items that remind us of a place we visited or thing we did. But what happens when, instead of remembering your trip to Souvenir Land, you want to remember the time you murdered some orphans or decapitated your mortal enemy?

The Creepy Souvenir is a sufficiently morbid item that is kept to show off the (normally) horrible thing(s) a character has done. Mostly, it's human body parts — heads, teeth, skulls, skin, fingers — for obvious reasons. Sometimes, other personal items are taken, like dog tags, but the general rule is the bloodier, the better.

For extra bonus points, taxidermize it because Taxidermy Is Creepy. The character might have an entire Trophy Room or Wax Museum Morgue of such things. Particularly disturbed individuals may carry the items around with them wherever they go.

Related to, but distinct from A Love to Dismember. Even most collectors of human trophies don't go so far as to "use" the body parts.

May easily lead to a case of Chronic Evidence Retention Syndrome when these souvenirs end up in the wrong hands.

Human Head on the Wall is a Sub-Trope. Crosses over occasionally with Skeletons in the Coat Closet, Genuine Human Hide, Shrunken Head and Having a Heart. Compare Battle Trophy, Collector of the Strange, Stalker Shrine, Kitsch Collection, Decapitation Presentation, Finger in the Mail, A Scar to Remember, and Past Victim Showcase. Tragic Keepsake is one of the few methods that this trope can be used by a good (but still creepy) character, carrying a body part of a loved one in their memory.

Note that this is different from using body parts for religious; medical; magical; or other purposes, although that's no less creepy.

Captain Love shows Alejandro he keeps the body parts of his dead enemies as souvenirs.

Captain Love shows Alejandro he keeps the body parts of his dead enemies as souvenirs.