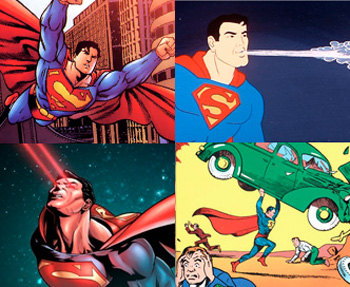 Superheroes sometimes have an unintuitive combination of powers. Sometimes this is a Justified Trope. For example, anyone with All Your Powers Combined will have Combo Platter Powers at least some of the time. Other times it is the result of either an excess or lack of thematic unity. Sometimes, combinations that look strange to modern-day Western conceptual categories made perfect sense in the culture where they originated.

This can happen through accretion, as with Superman; as a deliberate change to the character, like the Invisible Woman; or even at creation, like the Martian Manhunter. Sometimes there will be a Hand Wave as an off-hand explanation ("Secondary mutation", anyone?) or a later Retcon to explain how the powers actually work together; other times, it just happens. The most common set is the Flying Brick.

This does not include abilities gained by learning them or some other method of choosing them, as something that can be learned is only random if the character wants to study random things. This means most magical abilities are excluded unless it happens to "natural" magic that a character is born with.

Frequently a result of when a character keeps playing the Super Power Lottery. Compare Required Secondary Powers when the oddball minor powers are actually necessary to make the main power work properly. When one of these powers is significantly less powerful than the rest, it's Flight, Strength, Heart. When it's the standard Flight, Super Strength, and Super Toughness package, that's Flying Brick. If it's flight + some ranged attack, that's Flying Firepower.

Contrast One Person, One Power and Single-Power Superheroes, where every super-powered person only has a single power (Required Secondary Powers notwithstanding). Compare Swiss-Army Superpower, Semantic Superpower and Imagination-Based Superpower where some people have single powers that they can use in multiple distinct ways, creating an illusion of "having lots of powers".