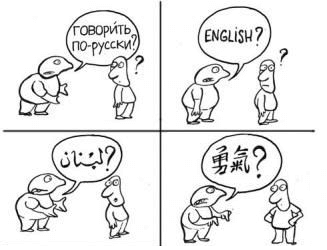 Lady Christina: You speak the language?
The Doctor: Every language.
— Doctor Who, "Planet of the Dead"
Advertisement:

Most people find it hard work to achieve native-level fluency in just one foreign language, even when they're a full-time student of it, but characters in stories might speak thirty languages well enough to be mistaken for a native speaker in each. This character might learn the local language fluently just by chatting while playing cards each evening for a few weeks, or perhaps due to having taken evening classes for a month when they were twenty years younger, they are able to win debates on metaphysics in a particular language. At the very least, they read the Genius Book Club books in the original language, even if that language is a dead language.

Sometimes there may be justification for this — perhaps it's a superpower, perhaps the character is immortal (and thus had the time to learn the languages the regular way) or perhaps they had an Upgrade Artifact. Sure, some people genuinely are good at languages, but sometimes it shows a lack of research — the author is not aware that learning a foreign language properly can be quite difficult and time-consuming (perhaps because the author has never properly attempted to learn a second language himself).

This is sometimes introduced via Suddenly Always Knew That; "Whoa, you speak Finnish? Mitä ihmettä? note Finnish language for "What the heck?"You never mentioned that!" "You Never Asked."

The fact that young children are better at learning languages than older children, adults, or teenagers makes this trope easier to justify if the character in question was either A) raised in a highly multilingual environment or B) a Child Prodigy who learned languages for fun when they were four years old.

Such a character may be a Cunning Linguist, but that's a character role rather than a trait. This may also be a trait of The Face: they know ten languages instead of fighting styles like The Hero. If the character's fluency in every language is never explained, that's Inexplicable Language Fluency.

Has nothing to do with Extreme Omni-Goat either.