Everything Sounds Sexier in French 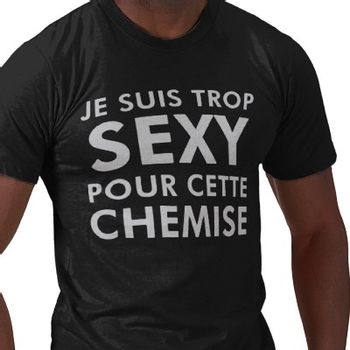 "I'm too sexy for this shirt".note  Ceci n'est pas une chemise, ceci est un T-Shirt
"Château Haut-Brion 1959, magnificent wine, I love French wine like I love the French language. I have sampled every language, French is my favorite — fantastic language, especially to curse with. Nom de Dieu de putain de bordel de merde de saloperies de connard d'enculé de ta mère. It's like wiping your arse with silk, I love it."Translation God's name of a whore in a brothel of shit from the filth of idiots from your sodomized mother.
— The Merovingian, The Matrix Reloaded

Notice how things take on an entirely different slant when you say them in a foreign language?

Spanish, Catalan and Portuguese: All sound Hotter and Sexier (See the Latin Lover trope for why) and exotic.

Italian: Everything sounds like delicious Pasta in Italian. Also as sexy and hot as Spanish above.

French: French sounds sexy, fashionistic, romantic and cultured, or (in the Anglosphere e.g. Britain and America) the accent of hubristic snobbish douchebags.

English: Received Pronunciation sounds wealthy, privileged and aristocratic. In the US, the East Coast "preppy" and "transatlantic" accents hold similar connotations. Other accents (Australian, Canadian, most American, Cockney, Northern English, Scottish, Irish, New Zealand, etc.) are hearty and sometimes "cool" too, but also uncouth or at least unsophisticated. (And if you're going for calm sophistication, definitely do not go with either Brooklyn or Texas.)

Japanese: Japanese usually sounds polite and cute. note Unless you are Norio Wakamoto, who seems to speak Japanese like German, as well as any actor in a Kurosawa movie.

Nordic languages: sound ideally suited for dark, gloomy, crime or political thrillers set in countries which popularly have too little sunlight, such as Wallander or Borgen.

Latin: Latin sounds solemn — whether in the sense of being genuinely ominous and/or intelligent, or alternately just pretentious. Unless you're doing a reconstructed pronunciation, in which case it can sound like a particularly badass Italian.

Chinese or Hindi: Chinese, e.g. Mandarin Chinese, sounds serene, meditative and philosophical. Or if not, very rude and shouty.

This is, of course, subject to Values Dissonance, as the French don't necessarily think their language sounds the sexiest. They usually dub the 'sexy foreign language parts' in Italian, and they usually perceive their own accent in English as horrible.

May overlap with Gratuitous French if there really is no reason for it to be in French. Compare Gratuitous Foreign Language, As Long as It Sounds Foreign, British Accents. See also Everyone Looks Sexier If French.

Skye Is Drawn To Francois

Skye Is Drawn To Francois