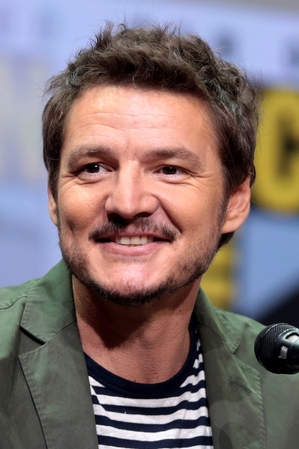 "I like those odds."
“Being Latino and being an actor has been a unique struggle and opportunity. There is a stereotype of Latino representation in television and in film that can be contradicted by the actual world of Latinos. When you don’t fit into what maybe a more stereotypical vision of what somebody whose name is 'Pedro' is, it can be a little bit harder to navigate, but I think that it's changing.”
Advertisement:

José Pedro Balmaceda Pascal (born April 2, 1975 in Santiago, Chile), known professionally as Pedro Pascal, is an award-winning Chilean-American actor and director, best known for playing anti-heroes and evildoers. He emigrated to America as a baby, when his parents' acts of opposition against Augusto Pinochet forced the family to flee Chile. Pascal studied acting at the Orange County School of the Arts, and the Tisch School of the Arts in New York.

For years, Pascal specialized in one-off roles and secondary characters. With help from his friend Sarah Paulson, he eventually joined the cast of Game of Thrones, portraying passionate and vengeful prince Oberyn Martell in Season 4. He earned international fame for his performance, enabling him to finally land higher-profile gigs. Before HBO aired Oberyn's final appearance, he agreed to co-star on Narcos as DEA Agent Javier Peña. While most of the stars didn't stay beyond the first Story Arc, he stayed through Season 3, elevating from third to top billing in the process.

Pascal's movie and TV roles after Narcos consist mostly of morally-gray father figures, especially after he co-starred in the Space Western Prospect. As it garnered acclaim in the indie movie circuit, he claimed a role in the Star Wars franchise, as paternal refugee-turned-Mandalorian bounty hunter Din Djarin. Consequently, the first live-action Star Wars TV show, eventual Emmy winner The Mandalorian, would also become the first program to give long-time Star Wars fan Pascal top billing from the start. A few months after Season 2 finished airing, his renown for sympathetically portraying various flawed fathers led to HBO casting him as Joel Miller in the TV series adaptation of The Last of Us.

Tropes applying to Pedro Pascal's performances and career include:

An acid-tripping Nick and Javi attempt to flee from supposed stalkers, but struggle to make it over a wall.

An acid-tripping Nick and Javi attempt to flee from supposed stalkers, but struggle to make it over a wall.