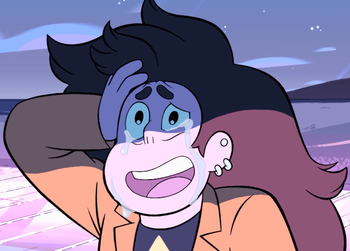 "Why are you laughing? Why are you crying?"
"You laugh, and keep laughing. It's SO funny, you can't stop. Tears run down your face."
— Undertale
Advertisement:

It is said that laughing and crying are very close actions, despite usually expressing opposite emotions. So close that, in fiction, a character faced with a dreadful situation may start laughing out loud, gradually growing more and more discordant and strained, before that laugh progressively melts into sobs. When this happens, the initial laughter is usually just there to mask the distress, and isn't so much genuine as it is a hysterical reaction. It's sort of a way to say, "My emotions are out of control; not even my body knows what to do right now."

It can also be done as a form of Mood Whiplash, where the character is in the middle of a laugh and learns bad news, immediately making them switch to tears. It has nothing to do with laughing so hard that you have tears in your eyes.

It's also sometimes used by actors to cover for Corpsing, in scenes where they can get away with disguising a fit of the giggles as violent sobbing.

This trope is surprisingly prevalent in Real Life with some often resorting to laughing when faced with any depressing or traumatic moments, before starting to express their true grief in tears.

A subtrope of Mirthless Laughter. Also compare HA HA HA—No, Laughing Mad, and Tearful Smile. Related to Made Myself Sad.

Chortles' secret to making a beautiful garden is to make a cocoadile cry, by telling it hundreds of incredibly lame jokes. The chocodile laughs so hard it emits Ocular Gushers.

Chortles' secret to making a beautiful garden is to make a cocoadile cry, by telling it hundreds of incredibly lame jokes. The chocodile laughs so hard it emits Ocular Gushers.