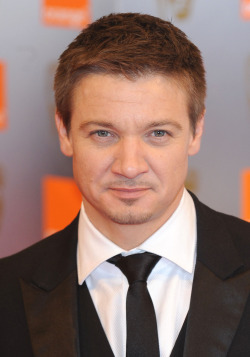 "I need to react to a script, to feel strongly about it in some way. And I need it to be a complex character for sure. And also, I think a lot about what kind of audience there is for the film, what they're looking for and ways to connect with them in the playing of a character."
Advertisement:

Jeremy Lee "Renni" Renner (born January 7, 1971) is an American actor known for his role in the Marvel Cinematic Universe as Clint "Hawkeye" Barton. He also starred in Mission: Impossible – Ghost Protocol and Mission: Impossible – Rogue Nation as William Brandt, as Aaron Cross in The Bourne Legacy and as Sergeant First Class William James in The Hurt Locker.

Renner first became interested in acting through an exercise at a local police academy, which gave him the opportunity to role-play a domestic disturbance perpetrator as part of a police-training exercise for an easy $50.

In addition to his work as an actor, Renner continues to cultivate a lifelong love of music. A singer, songwriter, and musician, he performed with the band Sons of Ben early in his career. Scenes in Love Comes to the Executioner, North Country, and The Assassination of Jesse James by the Coward Robert Ford briefly showcase Renner's singing talents. He currently maintains a YouTube channel

which also hosts a number of recent musical tracks.

Tropes displayed by Jeremy Renner include: