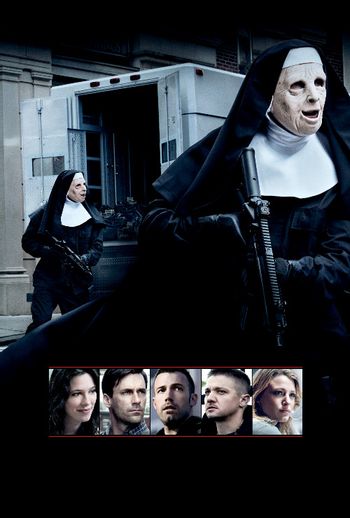 Left to Right: Claire, Frawley, Doug, Jem and Kris
"There are over 300 bank robberies in Boston every year. And a one-square-mile neighborhood in Boston, called Charlestown, has produced more bank and armored car robbers than anywhere in the U.S."
Advertisement:

The Town (2010) is a heist film, based on Chuck Hogan's 2004 novel Prince of Thieves, that follows a team of bank robbers in the Boston neighborhood of Charlestown and the law enforcement personnel attempting to stop them.

Doug MacRay (Ben Affleck) is not cut from the same cloth as his fellow thieves. Unlike them, Doug had a chance at success, a chance to escape following in his father's criminal footsteps. Instead, he has become the leader of a crew of ruthless bank robbers, who pride themselves on taking what they want and getting out clean: himself, James "Jem" Coughlin (Jeremy Renner), Desmond "Des" Elden (Owen Burke) and Albert "Gloansy" Maglone (Slaine). The only family Doug has are his partners in crime, especially Jem, who, despite his hair-trigger temper, is the closest thing Doug ever had to a brother.

However, everything changes when Coughlin takes a bank manager named Claire Keesey (Rebecca Hall) hostage during one robbery. When they discover she lives a few short blocks away from them, Coughlin gets nervous and wants to check out what she might have seen. Knowing what Coughlin is capable of, Doug seeks out Claire and starts a romantic relationship with her to keep his friend at bay. Claire has no idea the "charming stranger" is one of the men who terrorized her only days before.

As his relationship with Claire grows, Doug also wants out of the lifestyle and the town. But with the Feds, led by FBI Special Agent Adam Frawley (Jon Hamm), closing in, and James questioning his loyalty, Doug realizes that getting out will not be easy. Worse yet, his longtime associate and mob contact Fergie "The Florist" Colm (Pete Postlethwaite) may put Claire in the line of fire. Any choices he once had have boiled down to one: betray his friends or lose the woman he loves, concluding with an epic robbery of Fenway Park.

The film was directed by Affleck, who also plays the lead character. The film opened in theaters in the United States on September 17, 2010 to rave reviews, with Rotten Tomatoes giving it a "Certified Fresh" rating with 94% positive critical reviews. In addition, the film opened at number one at the U.S. box office with more than $23 million. It restored Ben Affleck's credibility as a leading actor, and also cemented his abilities as a director, proving that Gone Baby Gone was not a fluke.