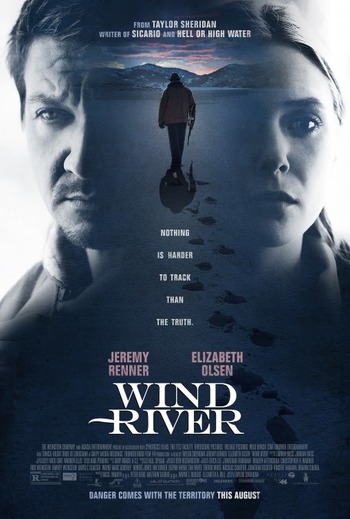 Jane Banner: How far do you think someone could run barefoot out here?
Cory Lambert: Oh, I don't know. How do you gauge someone's will to live, especially in these conditions? But I knew that girl. She's a fighter. So no matter how far you think she ran, I guarantee you she ran farther.
Advertisement:

Wind River is a 2017 crime drama/thriller written and directed by Sicario and Hell or High Water screenwriter Taylor Sheridan.

The film stars Jeremy Renner and Elizabeth Olsen as US Fish and Wildlife hunter Cory Lambert and FBI agent Jane Banner respectively who team up with local police to solve a murder of a young woman on the Wind River Indian Reservation in Wyoming. Like many of Sheridan's films, Wind River draws off of Western iconography in a modern setting to cast light on contemporary issues: in this case, the ongoing neglect of Native Americans by the U.S. federal government and the resulting problems of poverty, drug abuse, and violence.