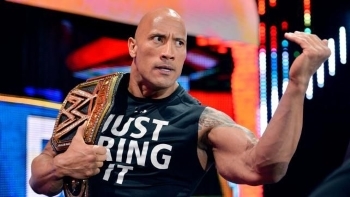 If the shirt wasn't clear enough already.
"All right! Bring it on!"
— Vulture pilot, StarCraft
Advertisement:

Someone has confidence that they will win a fight. They will taunt the enemy with something like "Come on! Bring it to me!" before unleashing their most powerful attack on their victim. It can be a declaration of their confidence or provoking their opponent into foolishly attacking them so that they can get the advantage.

A Bring It taunt can also come in the form of body gestures, such as beckoning, moving a finger or the whole hand towards themselves ("Come get me" for example — and sometimes done using both hands) to provoke anger, turning their backs towards the enemy and slapping their butt (usually accompanied by "Kiss this!" or "Nyah nyah nyah-nyah boo-boo!"), etc. A colorful retort to Trash Talk may invoke the trope: "Don't sing it, bring it!" (meaning stop the talking and just come at them).

A few instances can become Be Careful What You Wish For, because the taunted might just do that. In which the weak response by the taunter is, "He brought it!" after being taken down hard by the taunted (and shown to have not given the taunted enough credit).

This is also common among fighters who know they're outmatched and simply refuse to go down without making their opponent exude some effort.

Not to be confused with the Bring It On film series, which is totally different from what this is.

When Rokusho is about to be destroyed by the powerful Robo-Emperor, Medabee's Medaforce awakens, enabling him to defeat Robo-Emperor with a single shot. At the same time, Ikki realizes this means Medabee has a rare medal.

When Rokusho is about to be destroyed by the powerful Robo-Emperor, Medabee's Medaforce awakens, enabling him to defeat Robo-Emperor with a single shot. At the same time, Ikki realizes this means Medabee has a rare medal.