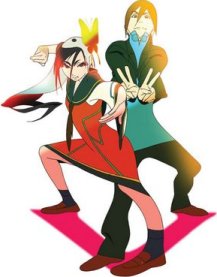 What if your loved one became the enemy of the world? What would you do?
Advertisement:

Kung Fu Love: Even If You Become The Enemy Of The World is a 2006 anime short film made by Studio 4°C. It was released as the third of four short films in the Amazing Nuts! collection.

It tells the story of high school student/kung fu master Hanako and her boyfriend Ichimonji, who one day suddenly find themselves on the run after Hanako is announced the enemy of the world. Pursued by the police as well as independent assassins, and still unsure how exactly any of this happened, Hanako and Ichimonji's feelings for each other are put to the test.

Originally planned as a series, but for various reasons cut down to a single 10 minute episode, Kung Fu Love still manages to be packed full of action, romance, laughs, gorgeous scenery and plot to make the mind boggle.