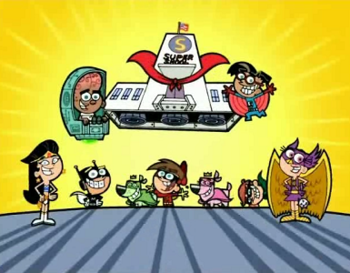 Tough luck for those who can't fly.
Colonel Stryker: We've managed to gather evidence of a mutant training facility in the Salem region of upstate New York.
Senator Kelly: This facility is a school.
Stryker: Sure it is.
— X2: X-Men United
Advertisement:

It's like a normal school. Drab classrooms with blackboards, hallways with lockers — and a danger room. Maybe even a hidden hangar. Oh, and the students all have superpowers, of course.

This is Superhero School, where young superhumans go to learn about their powers and how to use them for good. A subtrope of Extranormal Institute, where it's often not the place that's unusual, but the students. And sometimes the faculty.

Often inverted by introducing a supervillain school. You will also see instances where the school takes a neutral posture about heroism or villainy, focusing on teaching the students to control and make the most of their superpowers - with the result that aspiring heroes end up in classes next to wannabee villains, possibly among a larger group of kids who just want to get on with their lives.

Maybe we can excuse it for possibly being an Elaborate University High. Often has Danger Room Cold Open scenes. Badass Teachers are a given.

In stories where this is the primary setting, you can expect there to be at least one significant case of Power Incontinence and/or missing Required Secondary Powers (as seen in the Trope Maker, X-Men, with Cyclops), and numerous instances of How Do I Shot Web? and Boxing Lessons for Superman, as ways of justifying the trope. May also include classes on the Mundane Utility of different power sets if the focus isn't solely on heroics.

Compare with Academy of Adventure, Wizarding School, Ninja School, Hero Academy, and All-Ghouls School. A dark take on this trope can turn it into a School for Scheming. See also Superhero Capital of the World.

Professor X explains to Wolverine his school for "gifted" students.

Professor X explains to Wolverine his school for "gifted" students.