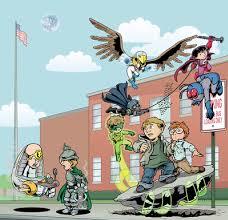 With Liberty and Recess for All
"To the cafeteria... FOR JUSTICE!"
Advertisement:

is a comic book series about the eponymous first public school for metaprodigies — super-children, in other words. That is, if you can call a top-secret underground school "public".

Created by Aaron Williams, who is also known as the maker of Nodwick and Full Frontal Nerdity — all of which can be viewed on Nodwick dot com

— it has been described as "Take the kids from Springfield Elementary, give them X-Men powers, and send 'em to Hogwarts."

Basically concerned with the general, superpowered going-ons of a school filled with superpowered children (most of whom are the children of Lawyer Friendly Cameos of various well-known Marvel and DC heroes), PS238 follows a small core cast of about ten to twelve kids, with plenty more who make cameos. The closest thing the series has to a protagonist is Tyler Marlocke, the notably only non-superpowered student on campus.

Needless to say, the series thrives on Super Hero-related tropes, and indeed, tropes in general. Several characters are openly Genre Savvy, including Tyler at times — though he would probably prefer if those tropes weren't there.

Originally a print comic, Aaron has followed the example of the Foglios and released it as a webcomic. The online version has now caught up to the print version and new content is being released. In 2008, a licensed Role-Playing Game using the Hero System was published.