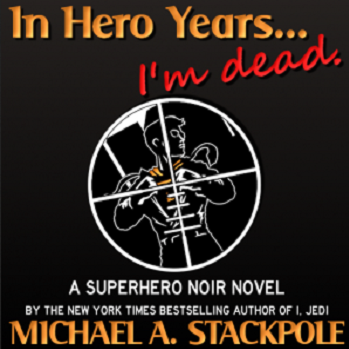 In Hero Years, I'm Dead is a 2010 "superhero noir" novel by Michael Stackpole which follows a superhero, named Coyote, returning to his city after a 20-year absence. He finds that the world has changed greatly since he left. Superheroes and villains have become commercialized, and combat between them is a ritual followed on the level of professional sports, complete with fantasy leagues. Facing a system where he'll never fit in, Coyote is forced to decide whether to change, to retire, or to do what he does best: break the system.
Advertisement:

Stackpole has released the novel as a digital download with sample chapters on his Web site, here.