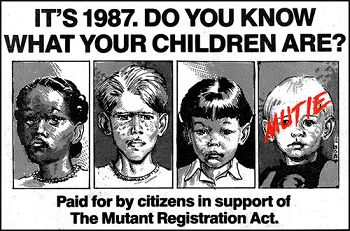 "Well, let me show you what is being hidden, Miss Grey. I have here a list of names of identified mutants living in the United States. Here's a girl in Illinois who can walk through walls. Now, what's to stop her from walking into a bank vault? Or the White House? Or into their houses? And there are even rumors, Miss Grey, of mutants so powerful that they can enter our minds and control our thoughts, taking away our God-given free will. Now I think the American people deserve the right to decide if they want their children to be in school with mutants. To be taught by mutants! Ladies and gentlemen, the truth is that mutants are very real, and that they are among us. We must know who they are, and above all, what they can do!"
— Senator Kelly, X-Men (2000)
Advertisement:

Any law that requires Super Heroes (or, really, anyone with superpowers) to be registered with the government in a national database (including the name and residence of each hero's Secret Identity) or face penalties. This was codified with the Marvel Comics' X-Men in the form of the "Mutant Registration Act", where it provided a metaphor for discussing racial, LGBT, and/or communist discrimination. It has also been used as a metaphor for American Gun Politics; after all, villains don't have to register with a Weird Trade Union in order to start robbing banks or tying women to railroad tracks, any more than a criminal needs a licensed weapon to commit a crime.

While sometimes the act can take the benevolent, unobtrusive form of a government-sponsored Hero Secret Service complete with Hero Insurance, in most cases the law is antagonistic in and of itself, whose only purpose is to prohibit superheroes from using their powers recklessly (or usually at all), or in the worst case scenario, is the first step to full-scale Superhuman Trafficking. Of course, no supervillain in their right mind would bother obeying the terms of this law, however registration would allow for identification of Supers that later become villainous or the prosecution of Supers that attempt to conceal their powers with the assumption that such an act would be later used for criminal or nefarious purposes. "Failure to register" could even be used as a charge of last resort in the absence of other evidence, much in the same way gangsters have been charged with tax evasion.

A registration act often allows the "outlaws" to know in advance which potential victims possess or do not possess super powers or limit a Supers' ability to defend themselves. When this trope is invoked enforcement of the act often permits the supervillains to do even more damage than usual as potential heroes are inhibited from acting freely. The situation is often resolved when the 'real' heroes defy the act by stopping the Big Bad the registered crimefighters missed, prompting a Reset Button hit on the whole thing.

Even though the law is meant to approximate just how The Government would react to superpowered vigilantes showing up in Real Life, it's not often that the law comes about purely as a result of normal civil processes, intelligent debate, or genuine public outrage. This is because comic books, like most serial works, operate on Rule of Fun, being escapist fiction where the stakes depend on one lone individual or a small group, which is hampered when your favorite character punches a clock and answers to "The Man". Exposing the act as the latest plot of some supervillain makes it easier to hit the Reset Button because Status Quo Is God.

Is probably best addressed in universes with a system of psychic or telepathic powers where unidentified users would represent an extreme invasion of privacy risk let alone issues with business transactions or games that involve use of secret information.

Actually implementing such a system is of course a tricky proposition, given the fact your targets can do things like erase your memories or blow up tanks by pointing at them, and depends on whether you're registering super humans or super heroes. In Real Life identification of a super abusing their powers could result in forfeiture of their property, termination of their employment and general suspension of their normal relationships and interactions if they are branded as a wanted felon without any need to apprehend or imprison the suspect. Of course in fictional worlds, villains may not have a good work-life balance needed for this punishment to stick.

See also the Ban on Magic, a restriction on how, when, or by whom magic can be used.

open/close all folders
Anime and Manga
Comic Books
The DCU: