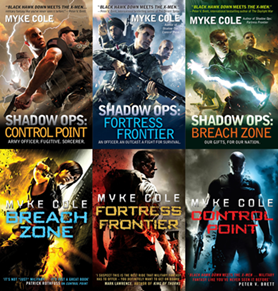 Shadow Ops is a Military Science Fiction/Urban Fantasy series that debuted in 2012, written by Myke Cole

. The series is set 20 Minutes into the Future where humans are suddenly manifesting inexplicable magical powers, and deals with the military and political response to people suddenly gaining the ability to shoot fire or animate the dead, as well as supernatural entities from another reality intruding into Earth.

The series currently consists of two trilogies, the first one focusing on Oscar Britton, an Army Reserve pilot who manifests prohibited powers and his escape from the corrupt military Supernatural Operations Corps well into the events of the Great Awakening, and the second, the Gemeni Cell trilogy, is a prequel series dealing with Jim Schwietzer, a US Navy SEAL who is killed in battle and then reanimated by the government early into the events of the Great Awakening. In order of publication, the books are:

The series provides a uniquely realistic and military spin on the traditional Urban Fantasy setting with abundant Gray-and-Grey Morality. While there are political undercurrents, they are largely background elements. It has been described as "X-Men meets Black Hawk Down" due to its combination of themes of metahuman superpowers and military fiction.