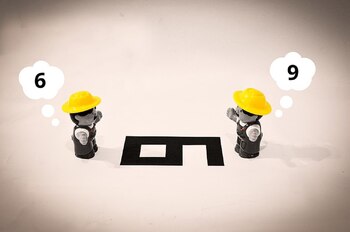 "It looks like a six to me." "Hmmm. From my point of view it looks like a nine."
A switching Point of View is closely related to, but distinct from, Rotating Protagonist. Rather than an omniscient third-person narrator showing us Jack, then Sally, then Pauline, as we would with a Rotating Protagonist, we see the story from Jack's perspective, then Sally's, then Pauline's. Can be very useful if the POV is third-person limited or first-person, as this can give us information we otherwise wouldn't have — for instance, we could find out that Pauline's motivations are genuinely good or she really did kill that guy, something neither Jack nor Sally would know.
Advertisement:

The most obvious way to do this is to switch from Jack being "I" to Sally being "I," as even if they're both in the scene, it's clear whom the focus is on. A book can also pull this off with third-person limited (you see both as "s/he", but you're only inside one's head at a time). Primarily a literature trope, but a duet or film can also work. You just need narration of some sort.

Switching from first person (I) to second (you) or third (s/he) would also work. Obviously, this is quite useful if one character falls unconscious or ill, or is simply not where the author needs the story to be.

Sister Trope to "Rashomon"-Style, but the accounts do not need to disagree or even overlap, and also Rotating Protagonist, but rather than simply seeing different characters, we get their perspectives. Super-Trope to Scrapbook Story. See also Twisted Echo Cut. When all main characters get their POV represented except one, it's a Non P.O.V. Protagonist. Not to be confused with Camera Perspective Switch, where the camera's point of view changes, or Perspective Reversal, where characters change their beliefs so that each expresses ideas formerly associated with the other.