Radio / X Minus One 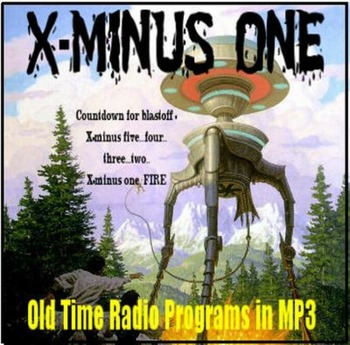 Countdown for blastoff... X minus five, minus four, minus three, minus two, X minus one... Fire! [Rocket launch SFX] From the far horizons of the unknown come tales of new dimensions in time and space. These are stories of the future; adventures in which you'll live in a million could-be years on a thousand may-be worlds. The National Broadcasting Company presents... X Minus One.
—Original Title Sequence
Advertisement:

First broadcast on 22 April 1955, X Minus One was a revival of Dimension X, airing on the NBC radio channel until 1958. This series holds the record for the longest running Science Fiction Radio Drama, a Genre Anthology of episodes that aired over a hundred different stories. The first fifteen episodes reused the Dimension X scripts with new talent behind the voices and sound effects.

This series was directed by Fred Wiehe, Daniel Sutter, and George Voutsas, lasting for one hundred twenty-six episodes. Most of the scriptwriting was by Ernest Kinoy or George Lefferts, but also bringing in new writers like Howard Rodman and William Welch. The scriptwriters would usually create adaptations, with a few scripts original to X Minus One.

Unlike most of its contemporaries, X Minus One would broadcast specifically to an adult audience* One of the program's sponsors was Pabst Blue Ribbon beer., adapting stories from Astounding Science Fiction and Galaxy Science Fiction for broadcast, adding sound effects and background noise to deepen the world. Stories included characters with gambling and addiction problems, criminal tendencies, and even a spaceship piloted by a computer with a female personality (who was being "made love to" by its "robot boyfriend").

, who have uploaded it to The Internet Archive

. Other sources also provide a chance to listen and own DVD or CD copies.

X Minus One provides examples of: